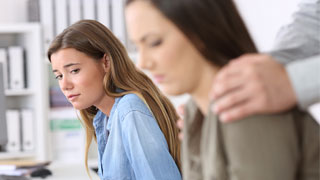 Category: Harassment
Author Name: TrainingABC
Posted: 09-09-2018 07:33 PM
Views: 2801
Synopsis: Stopping sexual harassment takes more than a policy or a sternly worded reminder from management.  It takes a workplace culture that doesn't accept harassment and bystander intervention is the most powerful took available to create that culture.

As managers, we must constantly be on the lookout for sexual harassment in our workplaces. We must take an audit not only of our behavior, but the behavior of our superiors, direct reports, and other employees. Sexual harassment, if allowed to fester, can lead to lower morale, lower productivity, and lower profits for your organization. 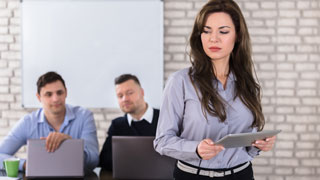 So what do we mean by bystander intervention? It’s pretty self-explanatory. The basic idea is that a bystander to sexual harassment takes action, rather than simply witnessing the harassment and doing nothing.

We’re not talking about physical action here; violence or other physical activity to stop or prevent harassment is not condoned. Instead, what we are referring to is bystanders responding through words or non-physical actions.

A case study is useful.

Witnessing this entire conversation, you decide to take action, rather than simply say nothing or walk away. With both your boss and direct report there, you tell your boss “That’s inappropriate” or “Leave her alone.” You also try removing your direct report from the harassment by distracting your boss through a discussion of work-related matters, for instance. After the conversation ends, you document the harassment and submit it to your organization’s human resources department.

This isn’t a complete list of options that the manager can consider. That said, the ultimate point is that the bystander to harassment doesn’t sit on his or her hands. They take action, whether that is while the harassment is occurring or after it occurs.

Simply put, they take some ownership over the situation, even though they aren’t the person who is actually being harassed.

Why is Bystander Intervention Effective?

This naturally leads to the question of why a third-party should get involved in a case of sexual harassment.

They may be thinking: “Shouldn’t I be minding my own business? Why should I get involved?”

There are several responses to these questions.

First, victims of sexual harassment often feel isolated and trapped. Oftentimes, the harasser is higher up the corporate ladder than the victim. Thus, in the mind of the victim, the power dynamics make it seem like he or she has no options to stop the harassment. They think that they must either tolerate the harassment, try to prevent it on their own, or simply leave their job. And in some instances, the victim may think that it is their fault that they are being harassed—even though this is not true.

Thus, victims often feel alone and powerless. This is where bystander intervention is so valuable. By intervening, you show the victim that they are not alone. You are an additional advocate in their mission to stop the harassment. This feeling of being part of a team goes a long way to ultimately eliminating future harassment.

Bystander intervention also creates a culture that refuses to tolerate harassment. Future harassers understand that the victim will not be alone. They know that members of the organization will speak up if they witness harassment and, thus, will have to think twice before harassing an individual in the workplace.

By contrast, an organization that does not encourage bystander intervention provides less of a deterrent to current or future harassers. If the harasser is in a position of power and knows that no one is going to speak out against his or her behavior, they will continue this behavior of harassment. This naturally leads to the conclusion that current and future employees will believe that the organization does not take sexual harassment seriously.

Understanding its importance and effectiveness, what can your organization do to encourage bystander intervention in response to cases of sexual harassment?

Critically, your organization needs to actively encourage bystander intervention. Again, we’re not speaking about physical intervention. To put it simply, it’s more of a “See Something, Say Something” approach. Employees should not be punished for acting when they see cases of sexual harassment. Instead, organizations should encourage employees to speak up, especially when the harasser has a high position in the organization. It is in these situations where victims are less likely to speak up, so making a point of encouraging bystander intervention in these circumstances is especially important.

Along with this, your organization should have comprehensive reporting mechanisms should an employee witness sexual harassment. Whether it is an anonymous hotline or something similar, you need procedures that are easy to follow. Victims and even bystanders may be hesitant to report instances of sexual harassment, so you want to encourage reporting and ensure that those reporting bad behavior won’t face retaliation in any way.

The Onus Is On You

In the era of #MeToo, your organization cannot take sexual harassment lightly. You must take swift, decisive action to prevent harassment and ensure that your employees are working in a safe, welcoming environment.

While not a complete solution, encouraging bystander intervention will combat and deter cases of sexual harassment in your office. Before expecting your employees to speak up, however, managers need to break the ice and speak up themselves, specifically about the value of bystander intervention.

By doing this, managers encourage employees to take action, rather than sit in their hands while harassment occurs.

So what are you waiting for?