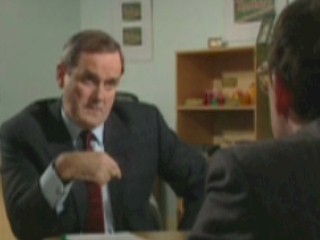 Think or Sink addresses professional team decision making. This program shows John Cleese who appears to be in a bad way. His ego has gotten in the way of his ability to solve problems and reach viable decisions in a way that’s professional and unemotional. This poor conduct has cost him his job, as we see at the very beginning of the program.

The new general manager, played by Robert Lindsay, speaks to Cleese to ask what went wrong. Through flashbacks, we see how a product re-launch led to Cleese’s downfall. Cleese insists that nothing was done wring, instead it was just pure bad luck. He believes that the product’s poor performance was unforeseeable.

Lindsay, on the other hand, shows that it was actually an inept, amateur team brainstorming session that actually caused the blunder. Cleese let his personal prejudices reign and imposed his position on the others, stopping initiative and hurting the self-confidence of the team.

Cleese learns how to keep competition between ideas instead of people. He also discovers that people should be encouraged to not remain sitting on the fence, especially when it comes to speaking out about doubts and potential issues.

This program is intended to be used as training in the areas of team building, leadership, decision making, communication and problem solving. The viewer will learn:

Please note: Due to contract limitations, Think or Sink can only be sent to addresses in the United States.