Understanding the Role of Emotional Intelligence in the Workplace 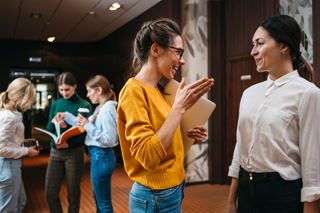 Successful workplaces require much more than great products and dedicated team members; truly successful environments are full of people who show up every day, committed to their organization, teammates, and professional well-being. A major aspect of a collaborative community in any setting is the emotional intelligence of each member of that community.

Emotional intelligence (EI), often referred to as “emotional quotient” (EQ), is a term used to describe an individual’s ability to understand and manage their own emotions in an effective way. It impacts how team members communicate, resolve conflicts, and work together toward a common goal. People with high emotional intelligence are often more likely to be hired and promoted, and in fact, 90% of top-performing employees have higher-than-average emotional intelligence. 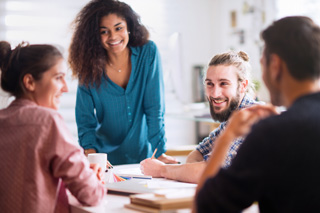 Many traits of emotional intelligence begin to take shape long before people are old enough to enter the workforce; it’s often influenced by natural personalities along with the surrounding environment of children as they develop. For HR professionals and industry leaders, maintaining their own emotional intelligence, as well as helping their teams grow in this area is critical to the overall success of any organization.

A psychologist named Daniel Goleman is credited for developing the five characteristics that make up emotional intelligence. His work happened in the 1990s but is still incredibly prevalent in workplaces today. Understanding these components can help managers and team members better grasp their own development areas, as well as the strengths and weaknesses of their peers and direct reports.

The first characteristic of EI is self-awareness. It refers to a person’s ability to identify the emotions they feel. Without self-awareness, the first building block of emotional intelligence is missing; if you are unable to figure out what you’re feeling, managing it becomes exponentially more difficult. In the workplace, an employee could feel frustrated when getting constructive feedback in front of their peers, but if they just think their boss “sucks” and cannot properly identify the issue, they have no way of finding a resolution.

Once an emotion is identified, your employee can then rely on their ability to self-regulate to control and manage their emotion. Instead of publicly lashing out at the person giving feedback, an emotionally intelligent person might privately address how or when they prefer to get feedback with their manager directly. Knowing how to self-regulate in the workplace is critical; if someone cannot resolve conflict and manage their emotions, lashing out could be seen as extremely unprofessional, hindering their career and the success of the organization.

When someone intrinsically wants to do something well or achieve a goal, their natural motivation contributes to overall emotional intelligence. For employers, this motivation can be a key factor in deciding who to hire and promote. As an example, if someone was motivated to spend extra time refining their presentation to impress a client because they wanted to succeed, it’s a signal that they have high EI.

Leveling up from understanding and processing your own emotions, empathy is the ability to identify and understand the emotions of those around you. Being able to read a teammate and tell that they are disappointed or frustrated allows individuals with high EI to provide support and encouragement to them. Teammates who lack empathy may have a difficult time resolving workplace conflicts as well.

When an employee struggles to communicate and collaborate with their teammates, they might be lacking social skills. These skills are what lead to harmony among teams and organizations, and they are especially critical for leaders. Leaders are expected to lead by example, so if they are unable to communicate and show respect, their team might follow suit, leading to disarray.

It’s not uncommon for someone’s emotional quotient (EQ) to be mixed up with their intelligence quotient (IQ). Though both of these measurements are important for personal and organizational success, they measure different things. IQ levels refer to a person’s overall intelligence and can be a strong indicator of success, but just because someone has a high IQ, it doesn’t mean they have a high EQ.

How EQ Manifests in the Workplace

No matter what level of the organization you are in, ranging from C-Suite to individual contributor, you will naturally pick up on the emotional intelligence of those around you. Giving and receiving feedback is a major indicator of a person’s EQ. If you are able to effectively communicate with empathy when giving constructive feedback, you’ll probably be more likely to receive feedback with grace and understanding. Both are indicators of a high EQ.

Day-to-day interactions such as how you greet people on calls and in meetings, how well you work with your team, and how effectively you are at communicating are common situations in which EQ is put under a microscope. Keep in mind that everyone has “bad days” where they may respond to something in a non-ideal way, but the overall EQ of someone is a cumulation of small interactions over time.

Individuals and teams with higher levels of emotional intelligence are more likely to succeed. Since teams with a high EQ can communicate more effectively, act with empathy, and understand their personal emotions and the emotions of those around them, major conflict is much less likely than in teams with a low EQ. While EQ cannot be “taught” completely, people can work on and refine their emotional intelligence with the right support. If you want your team to be happy in the workplace and succeed, hiring employees with high EQ is critical. If you already have employees with low EQ, helping them grow and improve their emotional intelligence will be a worthwhile investment.


Comments on Understanding the Role of Emotional Intelligence in the Workplace