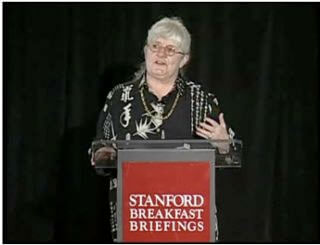 Southwest Airlines started with a simple idea, and managed to stick with it through decades of unprecedented growth. Many have tried (but failed) to emulate their success. According to Colleen Barrett, the idea is so simple, nobody quite believes it: customers return because they like the experience and they like the way they are treated.

But how do you keep your customers this satisfied? By keeping your employees satisfied. Barrett spends 70-80% of her time assuring that her employees are valued as people, and encouraged to do the right thing rather than doing things right. She acknowledges that you can't expect employees to be saints, but you can expect integrity and commitment to the team. Her guiding rule is to hire on attitude and then train for skills, seeking individuals who will take the business--but not themselves--seriously.

Colleen Barrett has been with Southwest from the very beginning, previously serving as Secretary of the Corporation, Vice President of Administration, and Executive Vice President of Customers. She has received numerous business awards and honors, including Forbes.com's "World's 100 Most Powerful Women," Fortune's "50 Most Powerful Women in Business," and Business Week's "Best Managers."