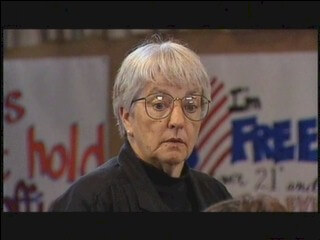 Jane Elliott has made a name for herself in the world of organizational learning with her powerful and highly effective trainings on the subject of racism. She began working in the field in 1968 when she did a social experiment with her class of third graders. Elliott told her class that blue-eyed children were superior to brown-eyed children one day and then turned the tables the next day, telling them she made a mistake and it was the blue-eyed children who were superior.

In The Essential Blue Eyed, you'll join Elliott in a training that takes place with a multiracial group of Mid-westerners. The training divides up the participants in terms of eye color with the blue-eyed presented as an inferior class. You'll get to see firsthand how this affects both the superior brown-eyed participants and the victims of the bias. Minority members of the training group take time to explain that they experience many of the biases exhibited during the exercise on a training basis.

After the training session footage, Elliott provides a 36-minute debriefing in which she discusses the experiences of the group. She poses thought-provoking questions to the participants and receives some answers that may surprise viewers. This portion of the video is a valuable teaching tool for trainers who want to lead powerful diversity trainings of their own.