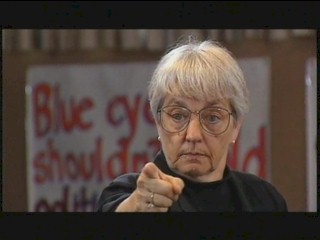 Since 1968, Jane Elliott has been opening the eyes of people of all ages to the reality of racism and bigotry in the United States. Her powerful training sessions help people experience what it is like to be a victim of racism firsthand and are known for changing people's lives forever. In addition to performing diversity trainings in-person, Elliott has also produced a series of training films for use in schools and workplaces that bring her messages to a wide audience.

The Stolen Eye is the latest film that chronicles Elliott's work. Instead of being shot in a training session held in the U.S., this film takes viewers with Elliott to Australia, where she conducts a session with white Australians and Aborigines. The discussion between the groups reveals the anger and sadness of the indigenous people over the destruction of their culture and the seizure of their lands by the government, much to the shock of the whites.

Using The Stolen Eye for your diversity training promotes a neutral setting for the free exchange of ideas related to racism and prejudice, as American viewers are less likely to feel defensive about the subject matter portrayed.