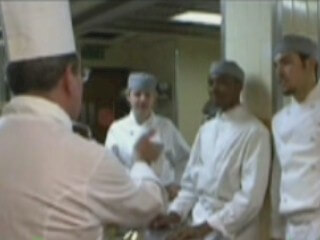 Aim: To show how to become a better leader.

The video: "I've gone from being the boy next door to being the bloke with the weight of the world on his shoulders." (Jamie Oliver)

Jamie is a natural and instinctive leader. And anyone who takes on a leadership role can learn a lot from watching him in action. Part of the new two-part Jamie's kitchen training series, Fifteen lessons on leadership demonstrates that leadership is an activity and not a position. Leaders and potential leaders will identify with Jamie's honesty and openness.

Jamie shows how a good leader makes sure everyone is clear about what is expected of them. He also has a clear vision of where he wants the project to go and can communicate this in a way everyone can understand.

Jamie is a highly visible leader who sets a great example to his team. He knows that when it comes to leadership, actions speak louder than words. He demonstrates how a good leader is prepared to tackle the unpleasant tasks as well as the pleasant ones.

Jamie shows total belief in his team. His positive approach to coaching, always looking for things to praise, really pays off. Even when his team mess up, he gives them the message that they can and will get it right. He is not afraid to delegate.

Jamie shows enormous responsibility throughout the project, personally, professionally and financially. He understands that if things go wrong, he - and no one else - will carry the can. His honesty in sharing how this affects him will strike a chord with all leaders.

Jamie learns continually throughout the project. He learns about himself and about his team, discovering which techniques of leadership work best for each team member. If one way of tackling a problem doesn't work, he tries another.

Due to contractual restrictions, this product is available for shipment to USA addresses only.